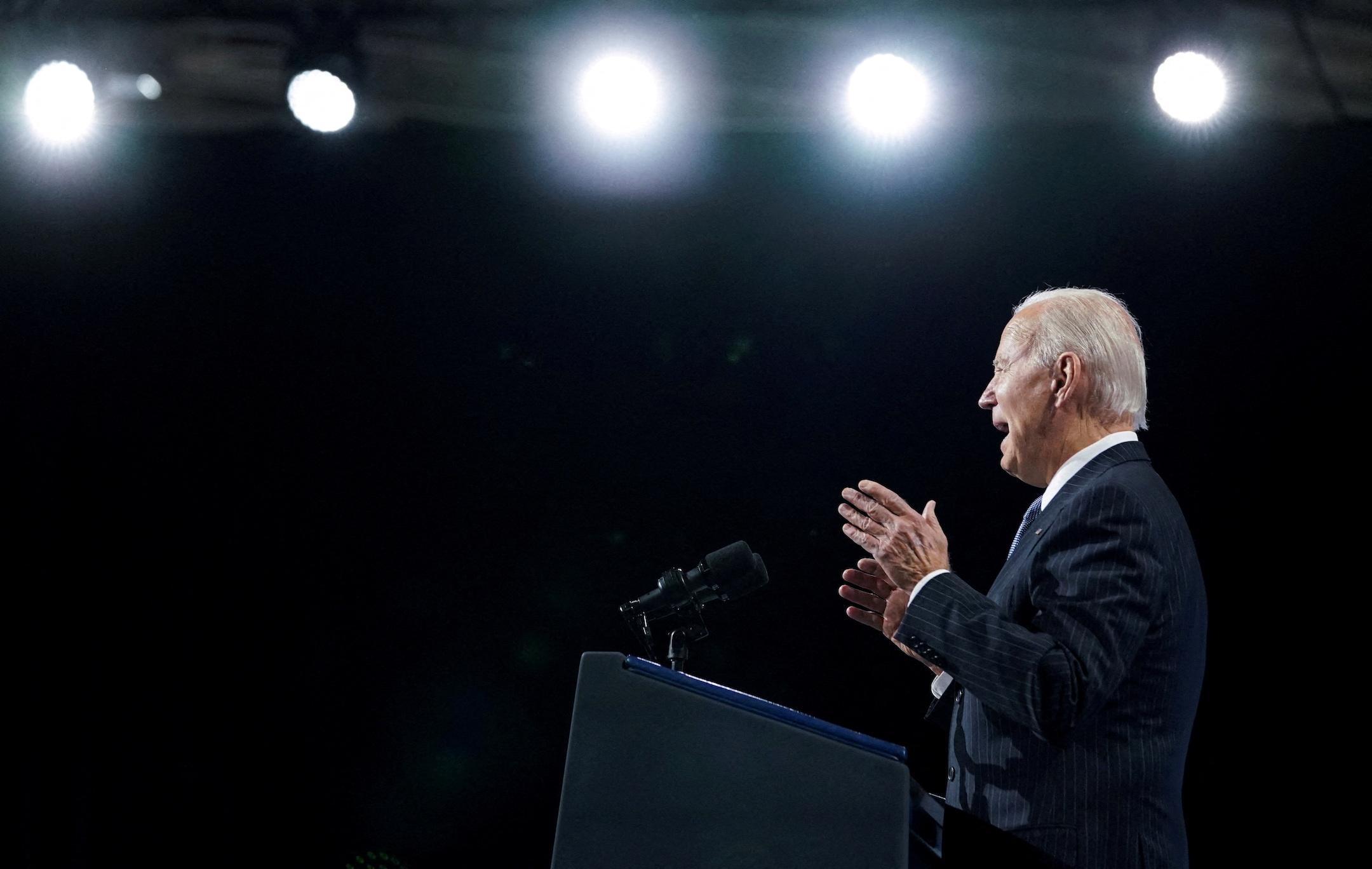 Washington Week is the longest-running primetime news and public affairs program on television. The show features a group of journalists participating in a roundtable discussion of major news events and can be found at 8pm ET on most local PBS stations.

17m 23s
For the second straight week, President Biden is facing scrutiny over his handling of classified documents from his days as vice president and Republicans were quick to pounce after more papers were found. Plus, the U.S. hit its debt limit but House Republicans want to negotiate and say there must be spending cuts before they’ll agree to raise the borrowing cap.
Watch Clip

12m 42s
President Biden is dealing with his own classified document controversy after days of revelations and bruising headlines. Attorney General Merrick Garland appointed a special counsel to look into the matter and House Speaker Keven McCarthy said Congress would also investigate it. It comes two months after Garland assigned a special counsel to investigate Trump’s handling of classified documents.
Watch Clip

House Republican leaders not calling for Santos to resign

10m 30s
Kevin McCarthy finally realized his dream of wielding the speaker’s gavel. His first week on the job was relatively easy as Republicans passed several party-line bills. But a new split among House Republicans was revealed this week, how to deal with freshman New York Congressman George Santos, who is facing increasing pressure to resign.
Watch Clip

The week of failed votes and McCarthy's leadership

15m 55s
The new year has brought new problems to the House, the likes of which this country has not seen in more than a century. But after days of failed votes to elect him the next speaker, Rep. Kevin McCarthy has mounted a comeback after numerous closed-door meetings, concessions and compromises. After flipping several holdout votes, he’s expressing optimism that he'll get the job.
Watch Clip

Biden's show of bipartisanship in the divided government

6m 49s
With a week of chaos in the House, the spirit in the Senate has been one of cooperation. This week, President Biden and Senate Minority Leader Mitch McConnell traveled to Kentucky to tout the bipartisan infrastructure act passed last year and the benefits of working across the aisle.
Watch Clip

What did the Jan. 6 committee accomplish with its report?

16m 41s
The Jan. 6 committee finally released its full report and a trove of interview transcripts from key witnesses. Along with sending four criminal referrals to the DOJ for former President Trump, the committee said Trump is to blame for the Capitol attack and should be barred from holding elected office again.
Watch Clip

How Zelenskyy's trip to Washington impacts debate over aid

6m 39s
Defending democracy abroad was front and center in the nation’s capital this week. On Wednesday, Ukraine's President Volodymyr Zelenskyy made a wartime visit to Washington. During a meeting at the White House, President Biden pledged to supply Ukraine with the highly sophisticated Patriot missile system. That evening, Zelenskyy addressed Congress which later approved more U.S. aid for Ukraine.
Watch Clip

19m 15s
The Jan. 6 Committee is preparing to vote on urging the DOJ to pursue at least three criminal charges against former President Trump. The charges under consideration are insurrection, obstruction of an official proceeding and conspiracy to defraud the U.S. government. Meanwhile, lawmakers scramble to avoid a government shutdown as Kevin McCarthy works to secure the votes to become House speaker.
Watch Clip

Biden invests in Africa as China and Russia loom large there

4m 5s
President Biden celebrated signing legislation protecting same-sex marriages and interracial marriages. He also held a three-day U.S.-Africa summit focused on investing more in the continent as China and Russia loom large there. The panel takes a look at why the president is focusing on Africa and how Russia's and China’s influence play into the timing.
Watch Clip

Uncertainty in the Senate as Sinema leaves Democratic Party

15m 3s
Sen. Raphael Warnock this week beat his GOP rival Herschel Walker in Georgia’s runoff election, temporarily handing Democrats a 51-49 majority in the Senate. But that advantage was thrown into doubt Friday after Arizona Sen. Kyrsten Sinema left the Democratic Party and registered as an independent. Meanwhile, the Biden administration negotiated the release of WNBA star Brittney Griner from Russia.
Watch Clip

8m 4s
President Trump faced another week of legal challenges after his real estate company was found guilty of tax fraud, more classified documents were discovered in a Florida facility he used, and the Jan. 6 committee indicated it would send a criminal referral for him to the Department of Justice. Trump was also the target of GOP criticisms for comments he made about suspending the Constitution.
Watch Clip

17m 11s
House Democrats celebrated this week as they elected a new and younger leadership team. Meanwhile, Republican leader Kevin McCarthy is expected to be the next Speaker of the House, but he has yet to secure the votes needed to be elected to the position as some hardliners in the Freedom Caucus continue to withhold their support.
Watch Clip

3m 57s
With only weeks left to complete their work and before Democrats lose power in the House, the January 6 committee met to discuss whether to make criminal referrals to the Justice Department. Members say the probe’s final report will be released later this month. Plus, the founder of the Oath Keepers, Stewart Rhodes, was found guilty of seditious conspiracy for his role in the Capitol attack.
Watch Clip

11m 2s
In Colorado Springs, a gunman opened fire inside an LGBTQ nightclub long considered to be a safe space for the community within the historically conservative city. The panel discusses if recent anti-LGBTQ rhetoric may have motivated the deadly mass shooting.
Watch Clip

Some Republicans speak out against Trump's role in the GOP

9m 50s
A rift is growing among Republicans over the party’s current and future leaders. This week, prominent members of the GOP called on the party to put former President Trump behind them after multiple election losses. Still, Trump remains popular among many in the base which will be critical to winning the presidential nomination.
Watch Clip

Why the red wave fell flat

11m 24s
While it’s still unclear at this time which party will control the House or the Senate, what is certain is that the Republican red wave simply did not happen. The panel discusses why it fell flat and what it means for the Biden administration's agenda for the next two years.
Watch Clip

11m 28s
Former President Trump is widely expected to announce another run for the White House next week. But some Republicans are openly criticizing him after the GOP's performance in the midterms. Plus, President Biden has also signaled he intends to run but has left the door open that, perhaps, he may not. The panel discusses the questions swirling within both parties about the future.
Watch Clip

11m 6s
The brutal attack on House Speaker Nancy Pelosi’s husband comes as threats to American lawmakers are at an all-time high. The incident highlights recent concerns over political violence in the years following the January 6 attack on the Capitol.
Watch Clip

12m 19s
With less than two weeks until Election Day, President Biden and Democrats are telling voters if the GOP takes control of Congress, the threat of government shutdowns, defaults and other cuts will create economic chaos. But Republicans are arguing they are best qualified to get the economy back on track and are confident a red wave is coming.
Supported by