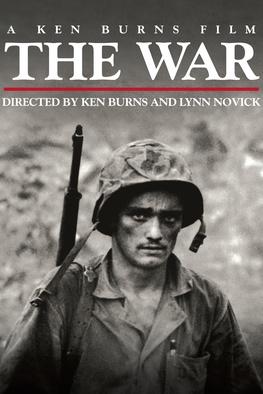 The story of the Second World War, told via personal accounts from four American towns.

A World Without War

A few weeks after the death of President Roosevelt shocks the country, Germany surrenders. Meanwhile, American sailors, soldiers and Marines endure the worst battle of the Pacific - Okinawa. In August, American planes drop atomic bombs on Hiroshima and Nagasaki, and the Japanese, too, surrender. Millions return home - to try to learn how to live in a world without war.

Americans are shocked by Hitler's massive counterattack in the Ardennes Forest - but by mid March, 1945, they are across the Rhine, while Russians are 50 miles from Berlin. In the Pacific, after weeks of desperate fighting, Iwo Jima is secured, and American bombers begin a full-fledged air assault of Japan.

Victory in Europe seems imminent, but Holland, the Vosges Mountains, and the Hurtgen Forest, GIs learn painful lessons as old as war itself - that generals make plans, plans go wrong and soldiers die. Meanwhile, on the island of Peleliu, the Marines fight one of the most brutal and unnecessary battles of the Pacific.

Pride of our Nation

On June 6, 1944, D-Day, 1.5 million Allied troops take part in the greatest invasion in history, but then bog down in Norman hedgerows for weeks. Saipan proves the costliest Pacific battle to date, while back home dreaded telegrams for the War Department begin arriving at an inconceivable rate.

Americans are shocked by terrible losses on the Pacific atoll of Tarawa, while in Italy Allied forces are stalled for months at Monte Cassino, and a risky landing at Anzio fails utterly. At home, as overcrowded "war towns" boom, economic transformation leads to confrontation and ugly racial violence.

When Things Get Tough

Americans mobilize for total war at home and overseas. Factories hum around the clock, while North Africa and then Italy, inexperienced GIs learn how to fight. Meanwhile, in the skies over Europe, thousands of American airmen gamble their lives against preposterous odds on daylight bombing missions.

The tranquil lives of the citizens of Mobile, AL; Sacramento, CA; Waterbury,CT; and Luverne,MN are shattered on December 7, 1941, as they, along with the rest of America are thrust into the greatest cataclysm in history.

Give early! Your gift before October 5th will be matched dollar-for-dollar up to $30,000 by a generous KCTS 9 donor.