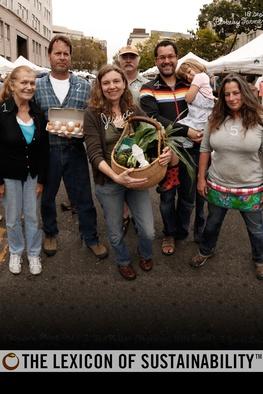 The Lexicon of Sustainability

57 (The Average Age of the American Farmer)

If the average age of the American farmer is 57, what happens when they retire? From Edible Schoolyards to Green Collar jobs, young people are learning how to grow their own food, eat healthy and engage with land and community. Learn about terms like “Greenhorns”, “Growing Farmers” and “Horticultural Literacy”.

The politics and culture of food are often expressed in terms of food security and food sovereignty. These terms are often used interchangeably, even though they mean different things. Erika Allen of Chicago’s Grower Power explains that food security considers whether a person knows where their next meal is coming from, while food sovereignty defends a community’s right to decide how they are fed.

By the end of the 20th century, nearly 80 percent of Americans lived in urban areas and no longer knew who grew their food. Then something happened. Across America, an urban farming movement began. On city rooftops, in vacant lots, and even in front yards, people are growing food in cities, or buying it from their neighbors, reconnecting them to where their food comes from.

Agriculture depends on water, but in many parts of the world water is a scarce resource. Effectively managing watersheds helps farmers preserve their farms while protecting the environment; while new technologies, like drip irrigation, help conserve water by putting small amounts precisely where needed, greatly reducing water waste.

In some parts of the U.S., a farm is worth more for its real estate than for what it grows and valuable food-producing land, which has been carefully tended for generations, is lost forever. Conservationist Bob Berner explains how land trusts provide guidance and economic support to keep farms in production and provide communities with cultural continuity.

GMOs, or Genetically Modified Organisms, are created when scientists take DNA from one plant species and add it to the DNA of another. Jessica Lundberg of Lundberg Family Farms advocates initiatives that would impose mandatory labeling of food products using GMO ingredients because she believes consumers have the right know what’s in their food.

Nearly 80 percent of the antibiotics in the U.S. aren’t used on people. They’re used on animals—animals we eat—and most aren’t even sick. Low-level doses of antibiotics for extended periods of time are used mainly to increase animal weight gain. Livestock ranchers Bill and Nicolette Niman share their insights on the growing movement to remove sub-therapeutic antibiotics from American beef.

Everything we do has consequences, even when hidden from view. Sustainability imbues all of us, as either consumers or producers, with a clear sense of responsibility. It gives us the opportunity to change how we think, what we make, and what we buy—and confirms that our actions matter; reinforcing that we are both the cause and the solution of that which ails us as a society.

Judith Redmond of California’s Full Belly Farm explains that food is more than what you eat. Food carries with it an undeniable sense of place, and the French even have a word for it: it’s called terroir. Learn more about what makes food taste different.

Studies show that nearly 1/3 of all fish consumers buy isn’t what they think it is. Scotty Fraser of Norpac in Honolulu, Hawaii explains that one possible solution for seafood fraud is traceability, which tracks fish from the moment it leaves to water until it ends up on your plate, providing consumers with valuable information about the fish they buy.

Most cattle are finished on industrial feedlots, where they are fed a mix of antibiotics, hormones, protein supplements, and corn. Farmers like Joel Salatin of Polyface Farms in Swoope, Virginia raise their cattle on grass, using rotational grazing and other fundamental principles of pasture management. Learn more about the difference between grass-fed and corn-fed beef.

Today, half the world’s food production—what we eat—depends on chemical fertilizers and herbicides. These are the foundation of Conventional Agriculture, but they pollute our soils, drinking water, waterways, and oceans. Unconventional farmers focus on building soil fertility by working with nature, not against it.

In the last century nearly 75 percent of U.S. agricultural crops have disappeared. Traditionally, farmers would save and share seeds with each other, yet today most seed production is controlled by just a few companies. Vandana Shiva explains the importance of protecting the culture and biodiversity of seeds. It’s what she calls seed sovereignty.

What if you could buy fresh fruit and vegetables each week, grown by a local farmer? Anne Cure of Cure Organic Farm in Boulder, Colorado explains how CSAs, which stands for Community Supported Agriculture, allow consumers to purchase subscriptions from local farmers, and in return, receive weekly boxes of fresh produce while getting to know the people who grow their food.

Consumers learn how to tell the difference between whole wheat and white, while farmers tell the rich story of heritage and identity grains and innovative bakers reintroduce the grains of their youth.

Did you know nearly 40 percent of food that’s grown, distributed, and bought never gets eaten? Learn why "ugly" food gets a bad rap. Through actions like food rescue and redistribution, composting and eating head to tail, people are doing something to reduce the food we waste.

Two farmers, Edwin Marty of Alabama’s Jones Valley Urban Farm and Jay Martin of Provident Organic Farms in Bivalve, Maryland weigh in on local vs. organic and why a piece of paper may not insure you’re getting the best food available.

By considering all of the external expenses factored out of the cost of food, an economic principle called true cost accounting helps consumers understand the real cost of the food they buy.