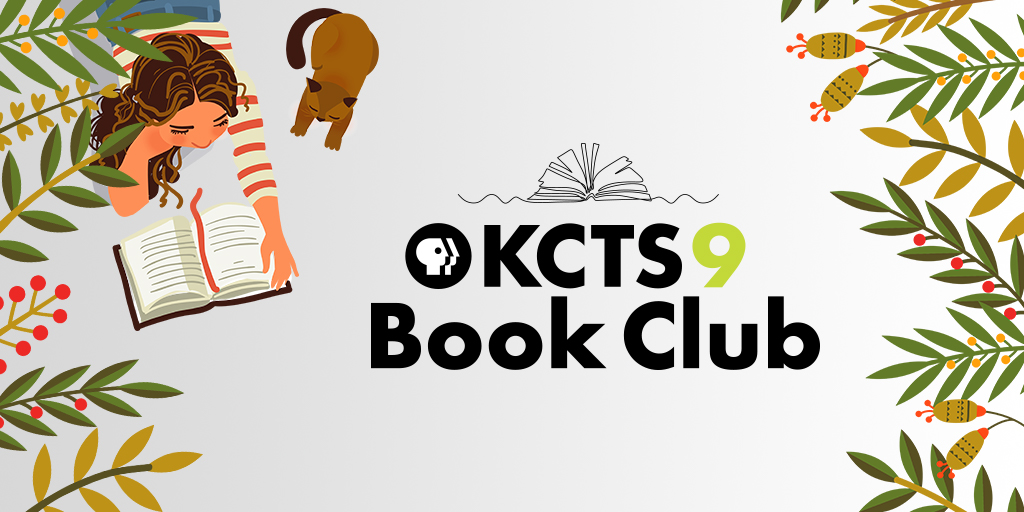 Thank you for participating in the KCTS 9 Book Club!

Over the past year, local authors teamed
up with KCTS 9,Third Place Books and
PBS books to lead monthly book discussions
on themes related to KCTS 9 programming.

Over the past year KCTS 9 partnered with Third Place Books and PBS Books to host a monthly book club. Local authors facilitated discussions on books they chose that corresponded to featured programming on KCTS 9. We discussed TV series based on books, Afrofuturism, outdoor adventuring and climate change, regional history and so much more.

We wrapped up the book club in May, but as a thank you to our author facilitators, we thought we’d share about their latest projects for your summer reading pleasure. We’ve got some related programming recommendations, too!

Ann Putnam is an internationally-known Hemingway scholar, who has made more than six trips to Cuba as part of the Ernest Hemingway International Colloquium, sponsored by the Cuban Ministry of Culture. Her new novel, Cuban Quartermoon, came, in part, from those trips, as well as a residency at Hedgebrook Writer’s Colony.

The main character of Cuban Quartermoon journeys over a ravishing and perilous landscape—from tourist Havana, with its mojitos and Havana Club; to Old Havana with its appalling deprivations; to an alley deep in Central Havana, with its mysterious Santeria drumbeat; and finally, to the caves of Pinar del Rio, where she discovers that America’s heart of darkness is also her own. This book weaves together elements of life in Cuba, Ernest Hemingway, and the Cuban Missile Crisis, to name several. ​

Claudia Castro Luna- The poems in Claudia Castro Luna’s new collection, Cipota Under the Moon, balance lush language and rich textures with hard historical questioning and confront the circumstances that led to the civil war, including the US involvement in El Salvador during the 1980’s,  that continues to destabilize the region to this day. Castro Luna shares her own experience of living in El Salvador during the civil war and pulls back the curtain giving the reader a rare glimpse into the extraordinary lives of people living in El Salvador today.

Alternating between prose poems and free verse Castro Luna also draws a parallel between the ruthlessness of war and the violence endured by communities of color in US cities and shows how children are often the silent, unseen victims of state sanctioned and urban violence. Cipota Under The Moon is a testament to the men, women, and children who bet on life at all costs and now make their home in another language, in another place which they, by their very presence, change every day.

David B. Williams is an author, naturalist, and tour guide whose award-winning book, Homewaters: A Human and Natural History of Puget Sound is a deep exploration of the stories of this beautiful waterway. Witty, graceful, and deeply informed, Homewaters presents a fascinating and hopeful narrative, one that will introduce newcomers to the astonishing life that inhabits Puget Sound and offers longtime residents new insights into and appreciation of the waters they call home.

Williams is also the author of Seattle Walks: Discovering History and Nature in the City and writes a free weekly newsletter, the Street Smart Naturalist.

Dave Boling- Dave’s most recent book, The Warner Boys: Our Family’s Story of Autism and Hope, is the true story of a family who fought for their children and how they grew stronger against all odds.

Seahawks star running back Curt Warner and his wife, Ana, were prominent figures in Seattle in the early 1990s. When they dropped from the public eye after Curt’s retirement, everyone assumed it was for a simpler life. But the reality behind their seclusion was a secret they hid from even their closest friends: their twins, Austin and Christian, had been diagnosed with severe autism. What followed was a painful struggle to hold their family and their marriage together in a home filled with chaos, emotional exhaustion, and constant fear for the safety of their unpredictable but beloved boys.

Laurie Frankel- “My latest novel, One Two Three, comes out in paperback on June 7. A New York Times Editors’ Choice, it tells the story of three sisters — teenage triplets — who live downstream from a defunct chemical plant that was polluting their water before they were born. Just when it seems life in their strange small town will go on the same forever, the first moving truck anyone’s seen in years pulls up, and in a town where nothing ever changes, suddenly everything does.

Narrated by each of the triplets in turns, it’s a novel about how expanding our notions of normal makes the world a better place for everyone and how when days are darkest, it’s our daughters who will save us all.​ It’s also a mystery, a race against time centered around a big crime in a small town, and featuring passionate, brilliant, but unlikely detectives…so of course I watched a lot of Masterpiece Mystery! while I was writing it.”

Kelly Brenner- “I'm currently in the editing process for my next book from Mountaineers Books and I'm excited to share the working title with you. It's called The Naturalist at Home: Projects for Discovering the Hidden World Around Us and will feature 20+ projects which any naturalist, or aspiring naturalist, can do to learn more about the natural world. Some of the activities come directly from my last book, Nature Obscura: A City's Hidden Natural World, like how to find tardigrades or go pond dipping and in fact, this book was developed as a result of many readers asking me how to do the things I wrote about in Nature Obscura.

I'm extra excited about this book because the publisher asked me to illustrate it and I had a great time drawing and painting everything from pseudoscorpions to slime molds and nudibranchs. The Naturalist at Home will be out Spring 2023. Additionally, I'm working on the final draft of the first novel in a planned series about a pirate naturalist, which I've had incredible fun writing.

I've really appreciated Deep Look on KCTS, particularly the episode featuring barnacles, which I wrote about in Nature Obscura, and are one of my very favorite marine organisms. I also really enjoyed Ireland's Wild Coast, especially the segment about Manx Shearwaters, which I'm particularly fascinated by.”

Kevin O’Brien- Kevin is the the USA Today and New York Times Bestselling Author or 22 thrillers, He's also a contributor to Nothing Good Happens After Midnight, a collection of suspense stories, edited by Jeffery Deaver; and The Hotel Angeline, a Novel with 24 Voices, which include Garth Stein, Erik Larson, Jennie Shortridge, Elizabeth George, Susan Wiggs and Julia Quinn, among others. Kevin's latest nail-biter, The Night She Disappeared, was released in July, 2021.

He's hard at work on his new thriller, a serial-killer story set in Seattle during World War Two (back before the term, "serial-killer," was coined).  When taking a break from writing, Kevin is often glued to KCTS 9. He's a sucker for American Experience, Great Performances and anything by Ken Burns. In researching for his latest novel, he recently re-watched Ken Burns' The War.  Kevin's new book is still untitled, but should be in stores in the summer of 2023.

Anastacia-Renee (she/they) is a writer, educator, interdisciplinary artist, TEDx Speaker and podcaster. She is the author of (v.) (Black Ocean) and Forget It (Black Radish) and, Here in the (Middle) of Nowhere and Side Notes from the Archivist forthcoming from Amistad (an imprint of HarperCollins) in 2023.

Angela Garbes- Angela’s newest book, Essential Labor, explores assumptions about care, work, and deservedness, offering a deeply personal and rigorously reported look at what mothering is, and can be. A first-generation Filipina American, Garbes shares the perspective of her family's complicated relationship to care work, placing mothering in a global context—the invisible economic engine that has been historically demanded of women of color.

She contends that while the labor of raising children is devalued in America, the act of mothering offers the radical potential to create a more equitable society. She reframes the physically and mentally draining work of meeting a child's bodily and emotional needs as opportunities to find meaning, to nurture a deeper sense of self, pleasure, and belonging. This is highly skilled labor, work that impacts society at its most foundational level.

Related programming: Nine Months that Made You

Thor Hanson’s latest book is Hurricane Lizards and Plastic Squid, an exploration of how plants and animals are adapting to the many challenges of climate change.  He also hosts biology videos for WIRED, and contributes short natural history videos to the popular PBS show Nature, for distribution on Instagram, TikTok, and other social media platforms.  These days, any spare minute Thor can find is spent madly reading nonfiction as a judge for the 2022 National Book Awards!

Steve Olson- “My most recent book, The Apocalypse Factory: Plutonium and the Making of the Atomic Age, is a history of the atomic age told from the perspective of the Hanford nuclear reservation. It’s a thrilling narrative of scientific triumph, decades of secrecy, and the unimaginable destruction wrought by the creation of the atomic bomb. As a native Washingtonian, I was very proud that this book was nominated for the Washington State Book Award, especially after my previous book, Eruption: The Untold Story of Mount St. Helens, won the award.

I’ve been getting ready to write this book pretty much my whole life. I grew up in the 1960s in Othello, Washington, a small town in the south-central part of the state just over a ridgeline from a mysterious government facility called Hanford. In 1984, while living in Washington, DC, I visited Hanford to write a story for Science 84 magazine, and by the end of the trip I had decided to write a book about the place. Thirty-six years later, the book is done.”

The KCTS 9 Book Club was a virtual conversation event series in collaboration with Third Place Books in Seattle and PBS Books.

Monthly book selections were made by a rotating group of Washington authors who also hosted the virtual discussions. The twist: authors selected books that weren't their own! Themes corresponded to current programming airing on KCTS 9.

Though we've wrapped up this event series, stay tuned for future events by visiting KCTS9.org/events.

Science and Nature
/ 1 Season
Plunge into the Pacific with researchers and cinematographers.
Watch S1 E5

Arts and Music
/ 1 Season
Celebrating contributions of Black artists to the cultural landscape of the Seattle area.
Watch S1 E5

9 Months That Made You

1 Season
Discover the thrilling story of how you were made.
Watch S1 E3

Science and Nature
/ 16 Seasons
Capturing the splendor of the natural world, from the African plains to the Antarctic ice.
Watch S40 E13

4 Seasons
IN Close features in depth stories from across the Pacific Northwest.
Watch S4 E435