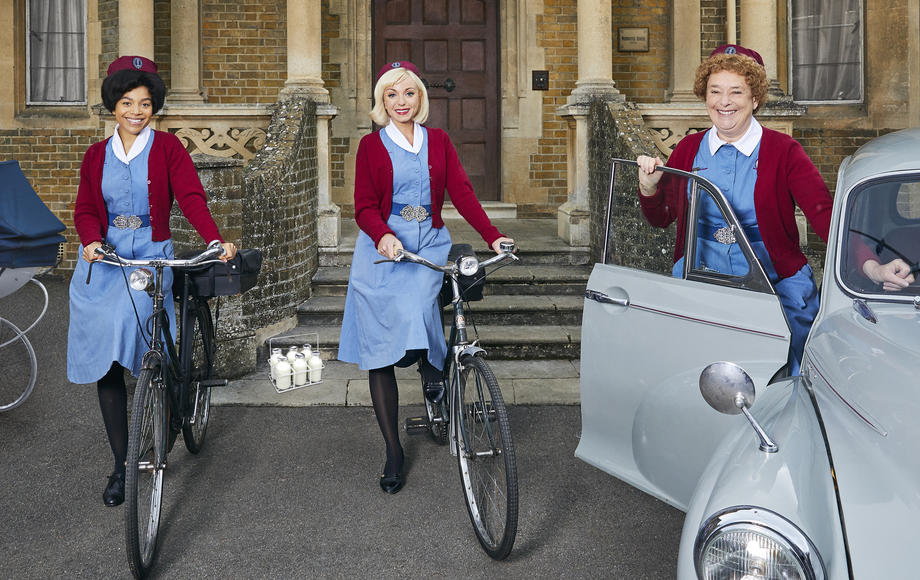 How accurate is ‘Call the Midwife?’ A 1950s London midwife shares her story

A Burien woman reflects on her days as a 1950s London midwife and discusses the popular Call the Midwife series.

The popular PBS period drama Call the Midwife tells the story of midwives who serve young mothers in London’s East End during the 1950s and ‘60s. The characters face economic, social, physical and emotional challenges, and every birth is an adventure with its own unique obstacles. But is this drama an accurate depiction of the time?

According to a Burien woman who worked as a London midwife in the 1950s, the show hits close to home. Susan Eckersley was born in a small town in the northwest of England in 1928. She worked as a midwife in post-war London, later moving to the U.S. to study at the University of Pennsylvania, where she met her husband Alfred. The couple moved to the Seattle area in 1961.

Eckersley’s stories of serving London mothers sound like they were pulled from the pages of Jennifer Worth’s memoirs, the inspiration for Call the Midwife. In fact, Eckersley graduated from a nursing program at Elizabeth Garrett Anderson Hospital, where Worth worked. Eckersley’s real-life challenges from that era, and the affection she still has for the work, reflect the same gentle drama and devotion seen on the show.

Like the midwives of Nonnatus House, Eckersley and her colleagues got around on bicycles. Well, except for one midwife. Eckersley tells a story about a student midwife who had a motorized bike that she says sent neighbors into an “uproar.” The solution? Her colleague would pedal the bike until she was out of neighborhood. Sounds like something the show’s character Trixie would try!

Another story ripe for a Call the Midwife episode entails a night of dense fog that Eckersley calls, “a true London fog or ‘pea souper.’” She explains that, unlike what we see on the series, hospitals often provided taxis because of the equipment the nurses had to carry: gas machines for analgesics (which she says was used more prevalently than the show depicts) and heavy nurse’s bags. Sometimes, in an urgent situation, the fire department would provide a lift for midwives and their cargo. But on the night of the fog, no one could give her a ride. She remembers how difficult it was to see, with no point of reference aside from a flashlight that beamed just a few feet in front of her. Still, Eckersley found her way and did her job.

While speaking of her work in London, Eckersley reviewed notes, charts and photos she had saved from that time. She estimates that she delivered about 55 children — she even remembers some of their names. Looking at one photo in which she is bathing a child, she notes, “I can see steam coming up from the tub. It shows you how cold these places were.”

Eckersley faced similar challenges to the ones viewers see on the series: mothers begged to give birth at home to avoid the hospital; mothers had a difficult time finding people to look after older children; and midwives had to make hard decisions. Eckersley explains that midwives had guidelines, not rules, to help them decide if a home was appropriate for delivery, and sometimes a loving family and support outweighed small problems with the home’s conditions or cleanliness.

Eckersley says she often worked in tenements where families lived without even the basic conveniences we take for granted. She lauded Worth’s work for describing these situations with empathy. Eckersley explains:

“Finding a baby with dirty nappies — diapers — possibly meant that water had to be carried from half a story away and then heated on the stove for washing. It wasn’t just changing the baby and tossing the diaper in a washing machine. Keeping a home clean, too, was much more of a challenge. To illustrate how dirty the air was, I found that when I got back from my home visits, my uniform dress had a distinct ‘triangle’ of dirt in the front from the waist down. This was caused by my coat — the same as in the TV version—which opened up below the waist as I was biking.”

Though the work entailed long hours and adapting to difficult situations, Eckersley describes her experience as a midwife as “a happy time of my nursing career.” She says, “It was a great experience. It was hard work…. It was a long time ago.”

Call the Midwife is a moving and intimate insight into the colorful world of midwifery.