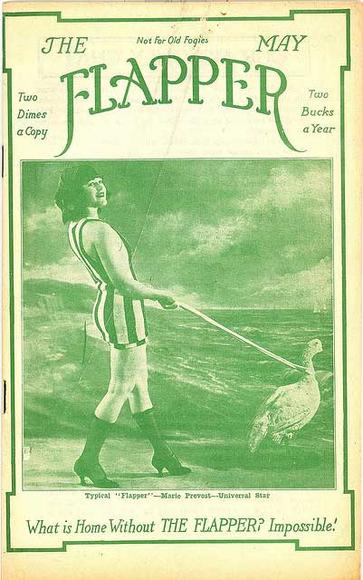 By: Mai Bouchet, Special to KCTS 9

But beyond these shorter hemlines and daring fashion attitudes was a strong undercurrent of change for women in the Roaring 1920s. This new generation of young woman, tired of men's dominance in society and of the old social norms that stifled them, took on new behaviors previously deemed not suitable for women. They drove cars, drank alcohol, and attended jazz clubs by night where they danced, smoked cigarettes and dated men casually. They began to work outside the home and advocated voting as well as other women's rights.

Along with these new trends and social statements, these flapper girls invented their own slang, some of which still makes an appearance in our vocabulary today. Some of it is indicative of these women's growing liberation: "handcuff" was a slang term for engagement ring, "hush money" was allowance from a father, and "dropping the pilot" meant getting a divorce. This generation even had their own magazine, “The Flapper”, whose tagline was "Not for Old Fogies", that catered to the movement.

Read on below to get in touch with your inner flapper and brush up on the lingo from the 1920s. Are you a tomato, a flapper, or a Trotzky?

Alarm Clock: Chaperone
Bank’s Closed: No kissing
Bean Picker: An individual who attempts to patch up trouble (i.e. picks up spilled beans)
Bee’s Knees: See “Cat’s Pajamas”
Berries: Great (i.e. It’s the berries)
Big Cheese: an important person (originated in this period)
Blouse: Go, to go (i.e. Let’s Blouse)
Cat’s Meow: Something highly sought after
Cat’s Pajamas: Anything good, the best, the greatest
Dapper: Flapper’s father
Ducky: Term of approval
Dud: A wall flower
Dudding Up: Dressing up
Embalmer: A bootlegger
Father Time: Any man over 30 years of age
Fire Extinguisher: A chaperone
Flapper: Girl
Flat Shoes: A fight between a Flapper and her Goof
Fluky: Funny, different, odd
Forty-Niner: Man who is prospecting for a rich wife
Gimlet: A chronic bore
Goof: Sweetie
Handcuff: Engagement ring
His Blue Serge: His sweetheart, his girl
Hooch: liquor
Hopper: Dancer
Out on Parole: A person who has been divorced
Scofflaw: A lawless drinker of illegally made or illegally obtained liquor (coined in 1923)
Sharpshooter: A good dancer who does not hold back while spending money
Snake Charmer: A female bootlegger
Tomato: Good looking girl with no brains
Trotzky: Old lady with a moustache and chin whiskers
Weasel: Girl stealer
Whangdoodle: Jazz music, jazz band
Whiskbroom: Man with whiskers

The hit drama centers on a great English estate on the cusp of a vanishing way of life.