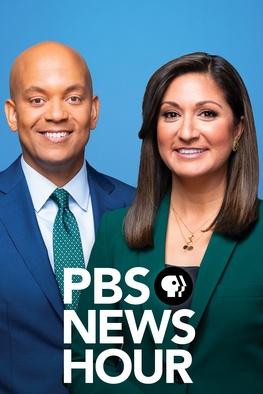 Safety of nuclear plant in Ukraine at risk amid fighting

Video title: Safety of nuclear plant in Ukraine at risk amid fighting

Video description: Violence continues near Europe's largest power plant in Ukraine, the nuclear facility at Zaporizhzhia, as Russian and Ukrainian officials continue to trade accusations over who's to blame. Sola Talabi, an adjunct professor and nuclear engineer with nearly two decades in the nuclear power industry, joins Nick Schifrin to delve into the risks and dangers associated with Zaporizhzhia.

A look inside the new theater production of 'Life of Pi'

5m 59s
The play "Life of Pi" opened this winter at the American Repertory Theater in Cambridge, Massachusetts. You may know the story from the bestselling book or the Oscar-winning film. But the creative team of the play wants you to reconsider what you thought you knew. Jared Bowen of GBH Boston has the story for our arts and culture series, CANVAS.
Watch Clip

Former officers charged with murder in death of Tyre Nichols

2m 55s
Five fired police officers in Memphis, Tennessee, have been charged with second-degree murder in a killing that has echoed across the country. The victim, Tyre Nichols, died after a confrontation during a traffic stop earlier this month. Attorneys for Nichols' family say body camera footage shows a police beating that lasted three minutes. John Yang reports.
Watch Clip

4m 14s
In our news wrap Thursday, the U.S. economy shows new signs of slowing after repeated interest rate hikes by the Federal Reserve, 11 people died in Ukraine during a wave of Russian missile and drone attacks, the FBI says it took down one of the world's leading ransomware networks and the National Archives asked former presidents and vice presidents to recheck their records for classified material.
Watch Clip

8m 17s
Thursday was the deadliest day in the occupied West Bank in two decades. Israeli forces raided Jenin and killed 9 people. In response, the Palestinian Authority cut security coordination with Israel. There were also reports of rocket fire into Israel from Gaza, which is controlled by the Palestinian militant group Hamas. Nick Schifrin reports.
Watch Clip

5m 27s
Meta, the parent company of Facebook and Instagram, has cleared the way for former President Trump to return to the platforms in the coming weeks. It comes two years after Trump was suspended following the Jan. 6 attack on the U.S. Capitol. Twitter also reinstated Trump's account, but he hasn’t tweeted since the decision. Sheera Frenkel of the New York Times joined Amna Nawaz to discuss.
Watch Clip

An early look at key 2024 Senate races and candidates

6m 31s
Congress has just started its new term, but many senators and Senate hopefuls are already thinking about the next election. Rep. Adam Schiff became the second Democrat to jump into the race for Senate in California, and Democratic Rep. Ruben Gallego announced he's running against Arizona Sen. Kyrsten Sinema. Amy Walter of the Cook Political Report with Amy Walter joined Geoff Bennett to discuss.
Watch Clip

5m 14s
Members of the Republican National Committee are meeting this week to determine the party's next leader. But the race for RNC chair between incumbent Ronna McDaniel and challenger Harmeet Dhillon is revealing deeper divisions in the GOP as Republicans hope to build a winning strategy for the 2024 campaign. Erik Iverson, former chair of the Montana Republican Party, joined Amna Nawaz to discuss.
Watch Clip

7m 4s
Canadian health authorities had previously said that a low risk amount of alcohol was about ten drinks per week. Now a panel of advisors to the government, citing some of this research on alcohol’s impacts, suggested lowering that to two drinks per week. Dr. Tim Naimi of the University of Victoria’s Canadian Institute for Substance Use Research joined William Brangham to discuss the analysis.
Watch Clip

6m 3s
This week's mass shootings in California, plus two others in just eight days, left 25 people dead and wounded 15 others. They also left many people to cope with the trauma of these attacks. Jennifer Carlson is studying the impact and aftermath of gun violence for the National Science Foundation. She joined Geoff Bennett to discuss how these shootings fundamentally change communities.
Watch Clip

6m 25s
A response from artists to Hurricane Maria and its aftermath is billed as the first major U.S. Museum exhibition of Puerto Rican art in nearly 50 years. The 2017 disaster inspired some 50 works by 20 Puerto Rican artists based on the island and elsewhere. Jeffrey Brown visited New York’s Whitney Museum for our arts and culture series, CANVAS.
Watch Clip

4m 25s
In our news wrap Wednesday, the man accused of killing seven people in Northern California made his first court appearance, a Virginia teacher who was shot by a first-grader says school officials were warned three times that day that the child had a gun and the top prosecutor ordered all suspects released in the 2020 Beirut port explosion that killed more than 200.
Watch Clip

Washington plan to fight extremism could be model for nation

6m 55s
In Washington state this week, legislators held public hearings to form a domestic violent extremism commission that, if implemented, would make Washington the first in the nation to target extremism with a public health and civic engagement approach. Laura Barrón-López spoke with Washington Attorney General Bob Ferguson about what his state is doing and how it could be a model for the nation.
Watch Clip

5m 48s
As Vice President Harris meets with the families of those killed in the Monterey Park shooting, many are grappling with the toll it is taking on their community. For Asian Americans, this past week has been especially painful. All 11 victims in Monterey Park were of Asian descent. Gloria Pan of MomsRising and the AAPI Against Gun Violence Coalition joined John Yang to discuss gun access.
Watch Clip

5m 33s
Pope Francis, in a wide-ranging interview with the Associated Press, spoke at length about his health, his critics and the future of the papacy. Most notably, he called laws criminalizing homosexuality fundamentally unjust and said being homosexual is not a crime. Paul Elie of the Berkley Center for Religion, Peace, and World Affairs joined Geoff Bennett to discuss the pope's interview.
Watch Clip

6m 14s
Historic levels of drama played out over the first few weeks of the new Congress. Legislative leaders are just now beginning to get into the day-to-day of Capitol Hill. This week, Speaker Kevin McCarthy sparked outrage when he locked out leading Democrats from key committees. Lisa Desjardins has a look at what's happening now and what's to come.
Watch Clip

12m 24s
The U.S. officially announced it will send American tanks to Ukraine as part of a coordinated effort with Germany, which will also send its tanks. It’s a shift in U.S. policy and one of the most significant weapons upgrades that Ukraine has been asking for. To discuss the development, Nick Schifrin spoke with John Kirby, the National Security Council Coordinator for Strategic Communications.
Watch Clip

8m 3s
The demand for electric vehicles is surging in the U.S., sparked in part by the Biden administration’s Inflation Reduction Act and the subsidies it offers. But a looming supply shortage of lithium threatens to stall the EV transition. Stephanie Sy traveled to California's Salton Sea where lithium deposits could help meet the country’s energy needs and support an economically devastated region.
Watch Clip

6m 5s
A former senior FBI official will appear in a federal court, but not as an investigator or a government witness. Charlie McGonigal is charged with hiding $225,000 he received from a former Albanian intelligence officer while he was still with the FBI. McGonigal is also accused of money laundering and violating Russian sanctions. Retired FBI agent Frank Montoya joined Nick Schifrin to discuss.
Watch Clip

11m 26s
Less than 48 hours after a gunman’s rampage shook the sleepy Southern Californian city of Monterey Park, a mass shooting in Northern California left a second trail of devastation. Officials said the gunman opened fire at a farm and another agricultural business near Half Moon Bay, a small coastal city outside of San Francisco. Amna Nawaz reports.
Supported by