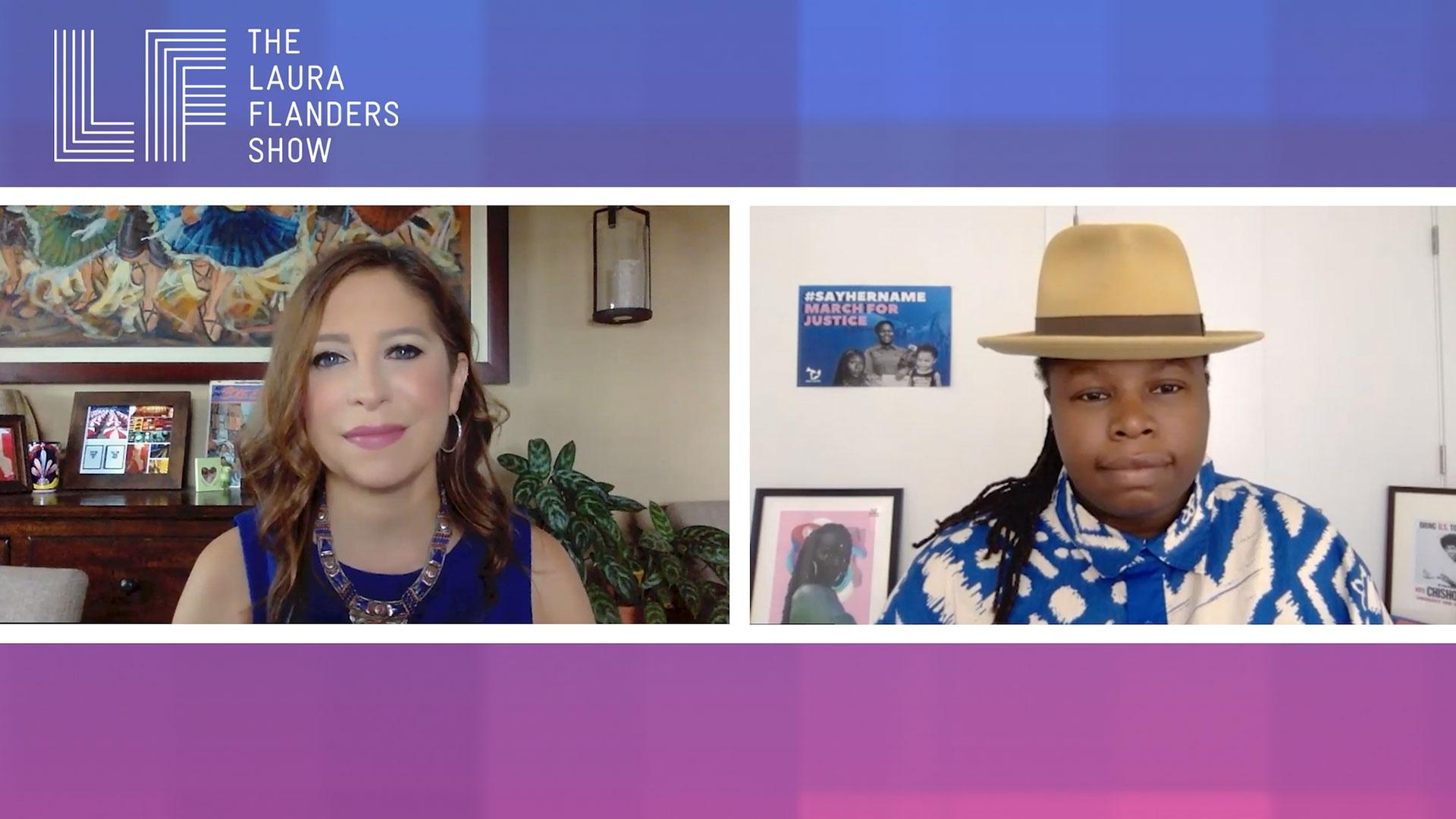 The Laura Flanders Show is back for a third season with in-depth interviews and ground-breaking field reports on the people and movements driving positive systemic change. This season increases its coverage of innovative economic models and ideas taking root across the country, including cooperative businesses, land trusts, community wealth building, participatory budgeting and universal income.

Video description: We are witnessing an unprecedented wave of terror at the muzzle of a gun. But all mass shootings are not covered in the same way. What is the media getting wrong — or right — on gun violence reporting? In this episode, Laura Flanders welcomes back Mitra Kalita and Sara Lomax-Reese of URL Media, a network of independently owned and operated Black and Brown media outlets.

Video rating:
Up next
Up next
Watch Now
Watch Episode

50 Years After Roe, Is Reporting on Abortion Still Too White

S3 E318 / 26m 46s / TV-PG
Forty percent of those who get abortion services in the U.S. are African Americans. Would you know it from the media coverage of the Supreme Court’s reversal of Roe vs Wade? S. Mitra Kalita and Sara Lomax-Reese of URL Media join Laura for this month’s “Meet the BIPOC Press” to consider what has changed in the coverage — and the organizing — around reproductive justice in the years since Roe.
Watch Episode

S3 E317 / 26m 46s / TV-PG
Prosecutors are powerful, deciding which cases to bring, what charges to make and what sentences to ask for. Until this year, only internal committees could investigate misconduct. Kizzy Cox reports on New York's Independent Commission on Prosecutorial Misconduct while Laura talks with Andrea James and Sakira Cook about the power prosecutors have when it comes to implementing new abortion bans.
Watch Episode

A Forgotten Coup & Americans on the Frontlines of Democracy

S3 E316 / 26m 46s / TV-PG
The Congressional hearings into the events of January 6 show that just a handful of election officials stood between Donald Trump and the overturning of the 2020 elections. This has happened before — more than a century ago in Wilmington, North Carolina when an armed mob removed a democratically-elected government by force. We look at the parallels between that coup and the events in DC.
Watch Episode

Linda Villarosa: Is the End of Roe A Death Sentence?

S3 E315 / 26m 46s / TV-PG
Is the Supreme Court decision in Dobbs v. Jackson Women’s Health a death sentence for women of color? The overturning of Roe v. Wade not only creates an abortion disaster for millions of Americans, it also exacerbates a maternal healthcare crisis that’s alreadly deadly for women of color. What’s their future now that more women will be forced to carry more babies to term against their will?
Watch Episode

Yellowstone: Can Indigenous Stewardship Save Our Parks

S3 E314 / 27m 1s / TV-PG
50 years after Congress established Yellowstone National Park, it remains the jewel of a system that comprises some 400 national parks. But for Indigenous Americans, the history is bitter. Thousands were forced to leave, families were massacred, and the Army was brought in to exclude Native Americans. Today, as droughts, floods and fires threaten the parks, many are calling for Indigenous control.
Watch Episode

S3 E313 / 27m / TV-PG
We are witnessing an unprecedented wave of terror at the muzzle of a gun. But all mass shootings are not covered in the same way. What is the media getting wrong — or right — on gun violence reporting? In this episode, Laura Flanders welcomes back Mitra Kalita and Sara Lomax-Reese of URL Media, a network of independently owned and operated Black and Brown media outlets.
Watch Episode

S3 E312 / 27m 1s / TV-PG
After the school shooting at Uvalde, and in the wake of the police murder of George Floyd, residents of many US cities are asking questions about budget allocation effectiveness. Cities are turning to a tool called participatory budgeting that gives residents and taxpayers real decision-making power over their cities’ budgets. Could this model bring power to people where they live?
Donate to watch

S3 E311 / 27m 1s / TV-PG
Local governments are experimenting with investing public resources locally in community-held businesses, and public health. They’re calling this approach Community Wealth Building, and it’s gaining traction around the world. Explore the spreading of Community Wealth Building and its impact on the well-being of individuals and communities so far.
Donate to watch

S3 E310 / 27m 1s / TV-PG
2022 will go down in history for the number of anti-trans bills introduced into legislature. Bills banning books, medical treatment and access to the bathroom have been introduced and the Supreme Court seems poised to overturn Roe vs. Wade, allowing states to ban abortion. As extremists crank up the volume on hate - trans people, especially trans women of color, face an onslaught of violence.
Donate to watch

Abbott Elementary Teaches Us All

S3 E309 / 27m / TV-PG
Can you remember the last time when the challenges that inner city public school teachers face were the subject of a popular TV series? Abbott Elementary does just that. The Philadelphia school on TV is fictional, but the challenges it faces are all too real. Can a TV show help stem the tide, shift the culture and change policy? Is quality education for all, a dream?
Donate to watch

S3 E308 / 27m 1s / TV-PG
Decades of discrimination have left millions of African Americans shut out of the housing market and at risk of being targeted by predatory lenders and exploitative loans. Capital collectives pool resources and reduce individual risk and can be a way for low-income Americans to buy into a home. Can cooperation and shared stewardship be a route to realizing the “American Dream?”
Donate to watch

Congressman Jamie Raskin On January 6th: After a Failed Coup

S3 E307 / 27m / TV-PG
The January 6, 2021 attack on the Capitol, intended to stop the certification of Joe Biden as the 46th President of the United States of America, “was as close to fascism as I ever want to see our country come,” says Jamie Raskin, Democratic Congressman from Maryland. Raskin talks with Laura about the strengths and weaknesses in US democracy and how best to address them now.
Donate to watch

The Extremist Revolution & Democracy Hanging by a Thread

S3 E306 / 27m 1s / TV-PG
The American Right is embracing a dangerous extremism, challenging elections, packing courts and aligning with Hungarian prime minister and Putin-ally Victor Orbán. In the midst of a climate catastrophe, with the Supreme Court poised to overturn Roe v. Wade, and the House preparing to hear from the select committee investigating the January 6 insurrection, what is at stake and how did we get here?
Donate to watch

Beating Poverty by Investing in Teachers: A Labor Story

S3 E305 / 27m 1s / TV-PG
Can education be the driver of local economic and social development in one of the poorest places in the US? What if the best anti-poverty program is investing in teachers and children? Take a look at Reconnecting McDowell and speak to some of the beneficiaries. Could this partnership between local drive and national commitment provide a model for the future?
Donate to watch

S3 E304 / 27m 1s / TV-PG
The fight over what can be taught in schools is a controversial issue. White voters are being mobilized to ban books, censor honest discussions of US history and current day racism, and organize against a fake spectre of “critical race theory” being taught. Laura and co-hosts Sara Lomax-Reese and Mitra Kalita interview Dr. Ibram X. Kendi, a vocal proponent of anti-racist education.
Donate to watch

S3 E303 / 27m 1s / TV-PG
In this special feature for Earth Day, we focus on Greenpeace, which is celebrating its 50th anniversary. The climate crisis is more urgent than ever and the most vulnerable are paying the heaviest price. We spend time with the leadership of Greenpeace, including co-executive Directors, Annie Leonard and Ebony Twilley Martin, the first African American woman to head a "Big Green" group.
Donate to watch

Forget Everything You Know About Texas

S3 E302 / 27m 1s / TV-PG
Red, Republican, anti-abortion, anti-trans — Texas has certainly been a testing ground for backlash policies and politicians, and that could be what’s happening now, but could it also be a bellwether of a different sort? Our guests today say that their state could be a predictor of how 21st-century change happens when people organize differently.
Donate to watch

S3 E301 / 27m / TV-PG
The latest peace talks in the Russia-Ukraine war may lead to an eventual ceasefire but not before displacing millions and damaging the air, water and land of what was known as the bread basket for the world. We’ve assembled a roundtable of human rights advocates from Ukraine, Russia & the United States to discuss the ongoing conflict and who highlight models of local resistance and support.
Supported by