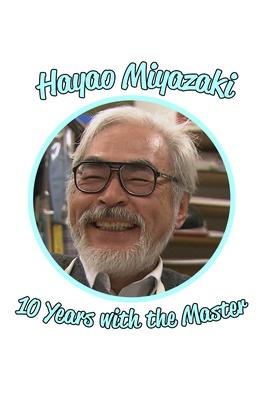 Hayao Miyazaki: 10 Years with the Master

HAYAO MIYAZAKI: 10 YEARS WITH THE MASTER is a look at Japan’s foremost film director.

Hayao Miyazaki dreams up characters and plot lines for what would become his 2008 blockbuster, Ponyo on the Cliff by the Sea. Miyazaki explores the limits of his physical ability and imagination to conjure memorable protagonists.

With production underway on Ponyo on the Cliff by the Sea, Miyazaki delves into memories of his late mother for a thread to weave the story. "Movies show who you are," he says, "no matter how hard you try to hide it."

Go Ahead - Threaten Me

Sparks begin to fly as Miyazaki and his son Goro, an up-and-coming director, work on the 2011 film From Up on Poppy Hill. In the final stretch of work on the film, the 2011 Tôhoku earthquake and nuclear disaster rock Japan and leave the team in shock. Amid power outages, they decide they must pause their work. That's when Hayao puts his son's resolve as a director to the test.

At age 72, Miyazaki takes on a new challenge — his first film about a historical figure, the highly-acclaimed 2013 film The Wind Rises. Bringing the film from concept to reality is a long and difficult journey. In the process, Miyazaki grapples with tough questions about issues such as aging, and the meaning of making animated films in a turbulent time.

New shows from down under

Together, we are stronger

Your gift by June 30th will help fund a trusted, essential service our community depends on.